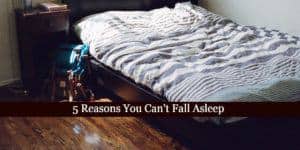 Can't fall asleep? You're not alone! More than half of all adults don't get the full 8 hours that the experts recommend. For many of those sleep-deprived people, the problem isn't that they're failing to go to bed on time; it's not being able to fall asleep that's having an effect on overall health and fitness. So what's stopping you from sleeping well at night? It could be that: 1. You're in Front of the Screen Too Late. Studies have found that late-night screen time can interfere with your body's ability to fall asleep. Researchers believe that the light emitted from tablet, smartphone and laptop screens delays the release of melatonin, an important sleep chemical, and that this leads to tossing and turning. Try scheduling a screen time cutoff 1 to 2 hours before bed to fall asleep faster. 2. You're Not Cutting Off the Caffeine. Speaking of cutoff times, if you're drinking coffee, soda and other caffeinated beverages too late in the day, you may be too wired at … END_OF_DOCUMENT_TOKEN_TO_BE_REPLACED